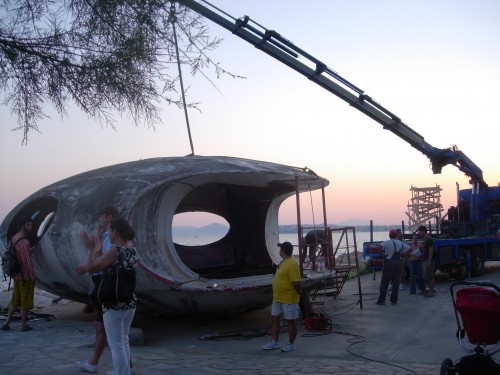 The Errands group is comprised by architects, visual artists, sociologists and graphic designers . It has been active since 2007 and has participated in exhibitions, such as the 7th Sao Paulo Bienal of Architecture (2007), the 2nd Athens Biennale (2009) and the 1st Istanbul Design Biennial (2012), in the exhibition “Chi controlla i controllori” in Gallery Clou in Ragusa, Italy (2013).

That’s exactly what makes them political: they have proposed new ways of how things should be, should be done, or should be seen.

By giving different solutions, acting in an autonomous manner, being independent or suggesting private or improvised interventions, interfering through the gaps and the non-functional sides of the system, these cases were a kind of criticism on anything established (socially, politically, architecturally, etc.) and any kind of system.

Because of their unconventional and untamable “character” ,they wound up being abandoned, forgotten, neglected, destroyed, unnoticed or have failed.

Errands are focusing on these cases that, by failing to be integrated into the establishment and never truly flourishing within the system, ended up as empty husks of a once promising change; visions that their failure in the system turned them into Utopias.

Through our projects we trying to re-animate those abandoned spaces, objects, those dead practices, those destroyed visions and concepts and reanimate them.

Our activities intend to take these utopias and turn them into reality once again.

We re-activate these failures through interviews, transportations, historical research, practices directly connected to them or doing the least possible interventions, always preserving their abandoned and failed state, as part of their history, and not trying to renovate them whatsoever.

In our projects we never invent completely new things, starting from scratch. We recycle in a way.

We only work on things that already exist or have existed.

We recycle ideas. We recycle something that someone once tried and seems to have failed.

Spaces that already exist. Objects that have already been constructed.

Buildings that have existed.

We work with the leftovers, remnants of the failures…